The elk are all over my yard right now. They are blowing out their winter fur and they move so fast if they sense me it is hard to get good photos. Fortunately one of my plants was worth stopping to eat... 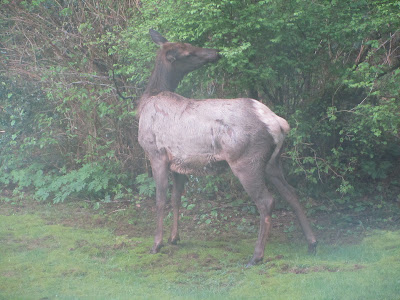 The photo doesn't quite capture it, but their pelts are pretty funny right now. They all look a little haggard. 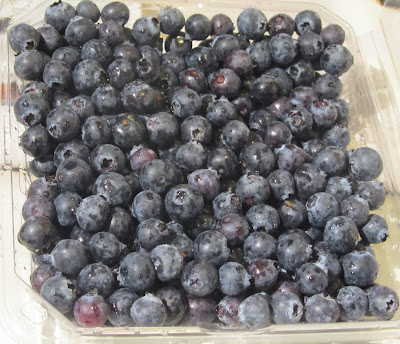 Meanwhile, I vowed to not "make" a dessert today in anticipation of tomorrow's baking plans. However, I did want to cook all the same.

The first recipe was Chocolate-Covered Katie's Blueberry Ketchup! Yes, I did it. Check out the big thing of blueberries from Costco. 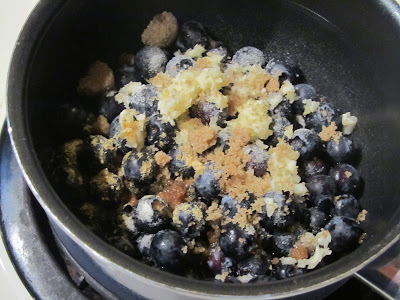 How strange is it to see garlic on blueberries?! I stayed true to recipe. I did a half batch and used brown sugar. 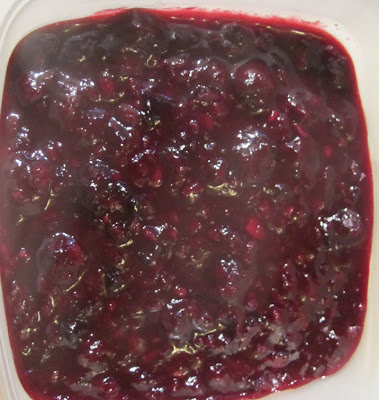 It reminds me a lot of plum sauce! I loved the vinegar flavor of it and I REALLY loved the smell while it was simmering. 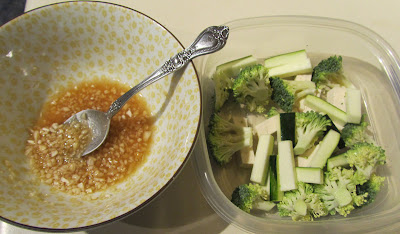 At the same time I sort of did her Protein French Fries, only I added veggies as well. My modification to the marinade was to only do a splash of soy sauce. I have rotten luck with soy sauce and tofu bakes but I think this is because I cut so much sodium from my diet that I am sensitive to things being too salty. I also added onion powder. 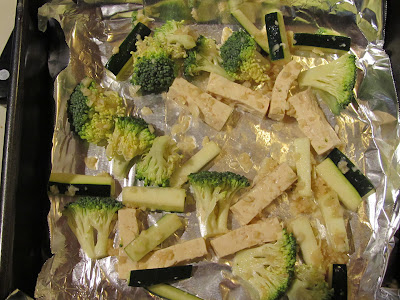 In my excitement I forgot to oil the foil. Sigh. I wanted to use coconut oil so bad.

The really unexpected surprise was that the veggies soaked up the marinade really well. Really nice garlic-vinegar flavor and the tofu was wonderful. Even if I had to peel it off the foil.

The annoying disappointment was that I didn't make enough and they of course baked WAY down. 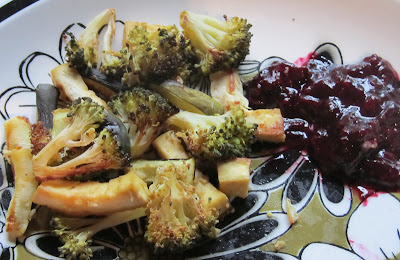 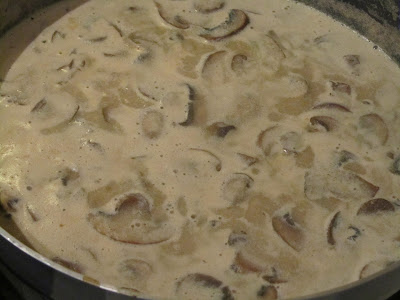 I also made the Vegan Mushroom Cream Sauce from the Daily Garnish which could be eaten by the spoonful as a soup in my opinion. My only change to her version was coconut milk in place of the non-dairy creamer. I suspect this is why it didn't thicken as much which didn't matter to me in the least. 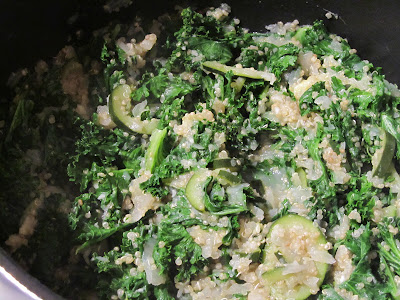 I put it over my kale-zucchini-quinoa masterpiece. :) If you are curious this involves one onion, about 4 cloves of garlic, an entire zucchini, a full bunch of kale, and finally the juice of an entire lemon (or more depending on my mood). It is my favorite way to eat quinoa right now.
Posted by thequiltingdoberman at 5:50 PM