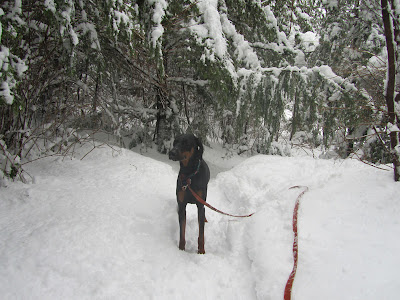 Today was pretty rotten hiking conditions, but I was desperate. We went out the Winery and stopped just short of Stan's Overlook. This turned out to be a good stopping decision as a route that normally takes me about an hour ended up taking me about an hour, 40 minutes. 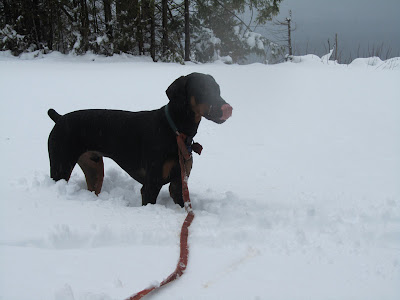 The entire hike was a wet, slick snow so I was moving slower than normal, but the snow at my turn around point was over 2 feet in spots and that really slowed us down. Nim had to work super hard to get through the snow and kept trying to drop in behind me. This would have been fine, but then he would get so close he would be climbing my calves as my legs slide behind me.

If it wasn't for the fact there was absolutely one else out I might actually be self-conscious that someone could hear me repeatedly yelling "Nim! Stop!"

Despite the deep snow part, it was actually the last mile or so that was the hardest. We were dropped significantly in elevation so the snow wasn't as deep but the rain was harder and we were already soaked.

I feel so-so prepared for my final but I am ready to take it regardless when it opens tomorrow. I will do a bit more tonight but there comes a point in which all the time in the world isn't going to make you more prepared.
Posted by thequiltingdoberman at 5:32 PM